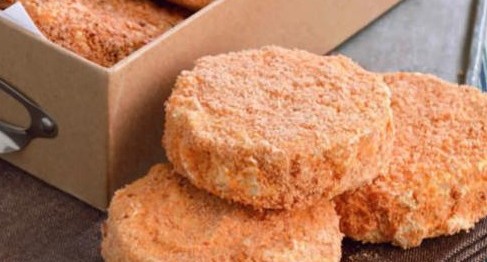 Make the meringue: Combine flour and cashews in the bowl of a food processor fitted with the blade attachment. Process until the nuts are finely chopped; set aside.

In the bowl of an electric mixer fitted with the whisk attachment, beat the egg whites on high speed until stiff but not dry.

Arrange the round molds on the prepared cookie sheet. pipe mixture into the molds or spread evenly using an offset spatula.

Bake for 15 minutes or until lightly golden brown. Remove from the oven and let cool for 30 minutes before removing from the molds. Set aside. Repeat with remaining ingredients to make a total of about 40 meringue discs.

Place 20 meringue discs and any broken discs in the bowl of a food processor fitted with the blade attachment. Process to make crumbs. Transfer to a shallow bowl and set aside.

Make the buttercream: Combine sugar and water in a saucepan. boil until it reaches 238°F.

Meanwhile, combine the egg yolks and whole egg in the bowl of an electric mixer fitted with the paddle attachment. Whip on high speed for about 10 minutes or until the mixture forms a ribbon pattern when the paddle is lifted. The mixture should be pale yellow. Add salt.

When the sugar syrup has reached its desired temperature, carefully pour the boiling syrup into the egg mixture in a slow, steady stream. Whip continuously on high speed until the mixture has cooled and the bowl is cool to the touch.

Lower mixer speed to medium. Gradually add butter, 1 cube at a time. The mixture might look broken and curdled. Whip a little longer and the mixture willcome together. Once smooth, add vanilla extract.

To assemble, spread about 1 to 2 tablespoons buttercream on one side of a meringue disc. Cover with another meringue disc to make a sandwich.

Spread buttercream all over the sandwich to cover all surfaces, including the sides. Roll the Silvanas in meringue crumbs, then refrigerate or freeze until the buttercream is firm.

View Other Recipes By This Chef »